I’m so grateful for your Presence on Earth at this time of such amazing new reality possibilities unfolding before us in every moment! I hope you are feeling the Magic of Life in flow, just beyond the obvious and in spaces of possibility in the gaps between thoughts and beliefs.

Please enjoy this Solstice light language energy transmission. The dolphins were very active in this one! 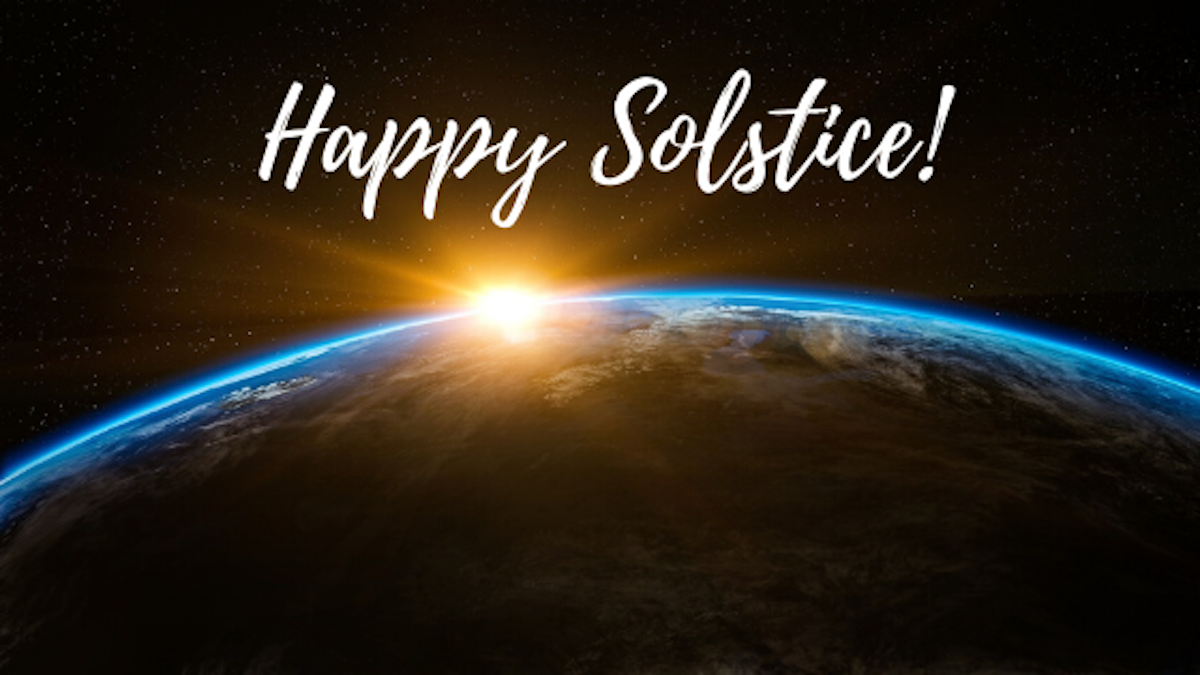 I also want to share a couple of visions I had over the past couple of days because they were so profound, beautiful and exciting! I feel these visions are part of the Solstice energy gateway and indicate new potentials and opportunities now available for all beings on Earth and throughout the galaxy to expand beyond the veil of separate consciousness, unify in Universal Love and step into the New Earth’s love reality potential now.

I hope you find these visions and energies as uplifting and hopeful as I do. We can really recognize the amazing new energies as we enter the Solstice gateway, and other powerful incoming energy that close out 2019.

I saw a huge golden city (gold in visions often represents the energy of Christed Consciousness–Love/Oneness/Unity Consciousness) on Earth in which I felt all lived in peace and harmony. I knew that although the image was only of one city, it represented humanity and all life living together in peace, harmony and cooperation. It was seen in the Now of my Being and as such did not feel like some far-off future possibility, but a tangible reality that exists now. It felt real, true, created and done. The love feeling that accompanied the vision was so palpable that it made the entire vision feel like a truth rather than a dream or fantasy.

I wish I recalled all the details of what I was told and felt, but alas, much of that inner conversation, which feels so clear at the moment, does not come back as clearly when I return to daily consciousness as key images I see and the feelings I felt.

The important thing is for me to share the gist of the truth of what I saw and felt–the wonderfulness of it all–and hope that by connecting to my energy as you read this, you will feel the love and peace of this New Earth reality right here now on our heart’s doorstep! This radiant and quite amazing world is in our hearts knowing and will be manifested. When it will unfold in our experience is unknown, but I know it does exist right now at a higher frequency dimensional reality we can access! How do I know that? I just accessed it so you can too.

The next day I saw/felt a unification of many aspects and a deep peace converge in my heart. It began with a prayer for a friend who was in the hospital. That prayer completed when I felt/knew he would be okay. Still enjoying that deep heart space, I moved into a prayer of gratitude for the many amazing humans and Light beings I feel so blessed to know and recognize, both in the physical and subtle realms. I say gratitude prayers all the time, but this felt different. It was an unusually powerful surge of love and peace converging in my heart.

The unusually intense nature of this love/peace coherence felt so much bigger than my initial prayer so I decided to ground that feeling deep into the center of Earth/Gaia’s core where all could access it through the Earth grids. While I sat present in Earth’s center, focusing on this incredible unified, whole-love feeling state, I noticed a vision beginning to unfold.

I watched as a representative from every Earth & Galactic kingdom came forward & held hands, forming a circle around the Earth’s core that held a powerful convergence feeling state of unity. One by one I saw representatives of the plant, mineral, animal, human and indigenous, element and elemental, ET/Star-beings and Galactic Federation, Ascended Masters, Angelic, Elohim, and so forth take a space in the circle.

Next a kind of spherical net began forming around the outside of the planet of all the individual and collective beings and energies that those representatives at the center of Earth represent. Innumerable beings began linking up. As above, so below and as within, so without. The net kept growing as more came forth and connected in, encircling the Earth in solidarity.

It included all humans & galactics, regardless of if they are perceived from our level of consciousness as good or bad, enlightened or negative. Perhaps it was humans higher soul aspects joining together but all beings were joining the circle and space was made for each without any question of their frequency or level of consciousness. All were welcomed and all came forth to be part of the net forming around the planet. It was beautiful to feel the welcoming and inclusiveness as ALL BEINGS WERE HONORED AND RECOGNIZED AS ONE FAMILY. I cried a long while just witnessing and feeling such fullness of love and the beauty of it all.

I was then told every human has been given a “passport” to exit the old Earth paradigm of 3D limited consciousness and move on to the next experience they choose. I was told that all are welcome in the New Earth, if they will release their current beliefs in a fixed reality and rise up into love/oneness. But it was also made clear that all will not choose to return to their True Self and cosmic consciousness at this moment. It matters not, each is honored in their choice. Many choices/paths/options are available. I was shown it is more complex than a binary timeline split between Old and New Earth. This ascension of all is much greater than that, and quantum so it’s more than a dual perception split.

I saw it like the curtain call at the end of a play. All actors come out, hold hands & take a bow. All are friends when the mask of their roles come off. Protagonists and heros are not applauded any more than antagonists and villains. All roles are needed for the play to be dynamic, interesting, engaging, and for its full creative range and possibilities to be played out with broad casting and seemingly infinite interaction potentials. All in this play were allowed to follow the script or be improvisational.

So all are being celebrated at a kind of after party for their part in the Earth duality experiment. Everyone could feel the fullness of love beaming into them as they completed not just this act, or this performance, but the entire play. It was closing down. Each actor would have to move on to new experiences.

I was shown it would appear to be a duality split because most would choose to continue playing out their current consciousness or expand into the most prevailing and obvious New Earth energy and consciousness patterns. So it would appear to be a split but that’s just the effect of huge masses of people tending to follow others seemingly into predominantly one or two choices. Other choices will be made, too, but won’t be as clearly seen or recognized from most human’s perspective. Nonetheless, all beings will be honored and loved, regardless of their state of readiness or the choice they make.

I saw a group of people who couldn’t choose because they felt in-between and confused, not resonating with either the old or new consciousness realities. They were told all is well, not to worry. They can step back awhile and observe (maybe like the zero point space I fell into that allowed much to drop away so I could perceive from new perspectives?) and would be assisted into balance and clarity. There’s still time for all this sorting to occur–at higher levels it’s already done and we are just coming into the realization and resonance of it and our choices. Indeed, all will continue to be guided and assisted in the fullness of love as changes continue to unfold that are well beyond current mental ability to fully understand or predict.

I continued crying through most of this intense vision, feeling overwhelmed by this trifecta convergence of love, peace and unity and also feeling body tension and resistance of many in the collective feeling fear, confusion and uncertainty about what’s next amidst the clarity that the play is ending. Many can’t see any alternative so they feel a lot of unexplained stress, anxiety and disconnection regarding their life circumstances.

I was also experiencing the amazing energy of all beings unifying and dropping the idea of discernment between positive/negative, good/bad to recognize only the God Essence at the core of each being, including and welcoming all beings from all kingdoms in this massive collective galactic unification back to oneness–at least at the levels of the Higher Self and Soul awareness. I kept hearing at certain points in the vision, before something new was shown…”and so it is. It is done.” So, like the first vision, this second one felt so real that I know it’s not only possible – it’s here and available now!

I’d love to hear form you in the comments section below if you are able to track the energy I am sharing here and curious if you find yourself in similar visions or even completely new awarenesses as a result of reading this post. I’m used to the wonderful feedback from people listening to light language (thank you all so very much!) but am curious about how effectively people are able to follow the energy of such written energy shares.

If I don’t manage another post before the New Year, I wish you and your loved ones Happy Holidays and a Extraordinary Magical New Year!